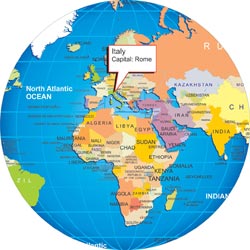 Massive Earthquake in Italy killed more than 260 people and damaged many buildings. Search operation is going on and Italy has declared a state of emergency in this worst situation by this earthquake on Wednesday 24 August 2016.

Earthquake Italy May end 2012
northern Italy hit by 5.8 magnitude earthquake, killed at least 16 people and hundreds of injured.
After earthquake hit the Emilia Romagna region on 20 may the people were living in the tents and that earth quake killed 7 people and several thousands of people were homeless due to the damage of the buildings.
This is again a new earthquake recently on 29 may 2012 and the earthquake affected areas are north of Bologna, Mirandola towns, Medolla and Cavezzo are also affected by quake on tuesday, but the northern cities of Milan and Bologna shake.

Italy | Where is Italy | Map of Italy | Flag of Italy